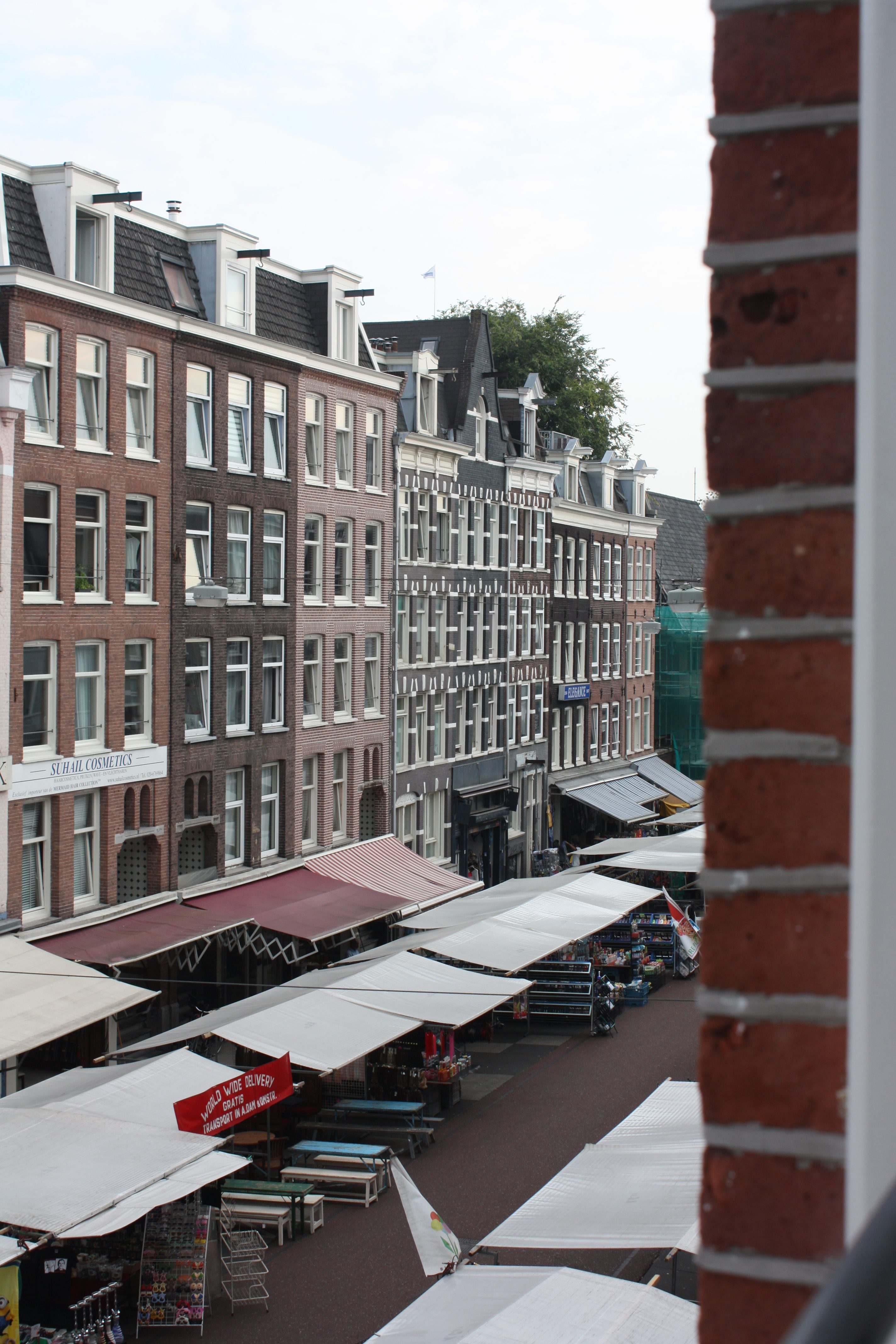 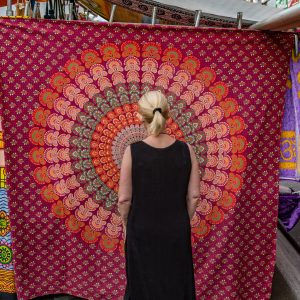 You will here have my impressions, gathered  in just under a week, living on Albert Cuyp Straat, Amsterdam.  Amidst the Netherland’s busiest market and purportedly also Europe’s largest daytime market, a new world of sights and sounds awaits.  Martin and I arrived on Sunday and found our new abode — on a long avenue named after a seventeenth-century Dutch painter.  The Dutch painters of this Golden Age loved depicting scenes of common peasant life, and so the ideals of our Albert Cuyp would have been put to the test.  The astonishing urban version played out on his street.

Albert Cuyp Market is in the De Pijp area, which has been described as the lively and bohemian  “Latin Quarter” of Amsterdam, with sidewalk cafes, bars and ethnic restaurants crowding every “plas” and springing up along streets where bicycles abound.  Full of anticipation, we turned the corner onto our street.   It was a quiet Sunday afternoon. 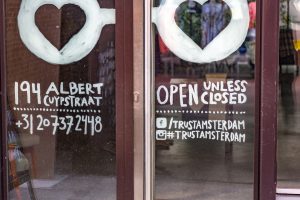 Looking up above the ground floor, one sees uniform, five-story brick houses, each one fitted with three floor-to-ceiling, white-framed windows on each level.  The rooftops create a harmonious and attractive skyline, with red-tiled pitched roofs and attic windows facing the street.   Lowering one’s gaze reveals ground-level storefronts with metal roll-down garage-type doors painted with a wild mix of store names and graffiti.  In between were steep, narrow, half-flight stairs leading to plain black doors.  One of them was ours.  The door opened onto flights of stairs only three inches wider than our suitcases.  It required a logistical analysis to figure out how to keep the door open long enough to get a suitcase onto the staircase.  One person could hold the door open, but then bodily blocked the staircase.   One case could get in, but then there was the matter of the other one.  Baffled, we began our accent.  On the third floor, we landed in our Airbnb rented flat.  It was renovated and simply furnished with modern accoutrements.  Cleverly utilizing the confined space, the kitchen was the hallway.  The bathroom was also the shower.  To prevent claustrophobia while peeing in the small closet-turned toilet, the door was made of opaque glass. The bedroom was literally for a bed only.  Our clothes had to find a home behind the couch.  Nevertheless, this was home.  The couch was comfortable and modern, and there was a nice balcony door in the bedroom.  It wasn’t raining.  A bottle of Pinot Grigio awaited us in the refrigerator.   We would be able to cook homey meals – and, the market was at our feet. 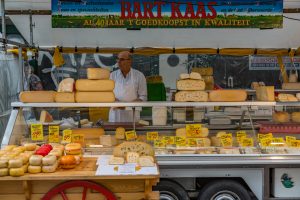 Starting at six o-clock the next morning, a crew began hauling out the poles, tarps and boards and landing them on the streets with huge thuds and thwacks and curses.  As the tents were erected and the stall tables were constructed, and the 150 stalls along the street were assembled, I watched from my third-story window in fascination.  First of all the garage lifted on the “Hair Extensions” shop.  After rolling out their wares, including pony tails of every shade on the planet, three adults and two children sat out on the street and had coffee.  Next, the bedding textile shop rolled out the goods.  Expecting a typical Californian farmer’s market, it seemed to take forever for the stalls to fill.  Finally, by about 10:00, the shops had all rolled up 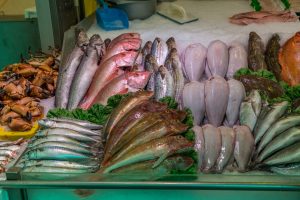 their doors, the merchandise was draped, hung, spread, iced, cooked and stacked. Market was ready.  Slowly the streets filled. You could do anything here, and do it cheaper than anywhere in the city.  Eat Moroccan food, select your whole fresh fish on ice, purchase fresh vegetables and oven-warm bread, get your authentic Dutch stroop waffles and acquire any spice from throughout the world.  Dress your entire family — shoes, bra, jeans, cocktail dress, children’s pants, ethnic print skirts, hats, bags.   Furnish your house with bedding and towels, bowls and pots, even washing machines were hauled out onto the street for sale. 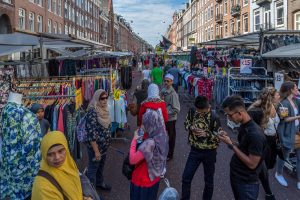 In late afternoon, the vendors start packing up, rolling their clothing racks down the street, pushing their racks into their stores, stowing their boxes of unsold food and goods into trucks.  The tents some down, the tables are stacked and hauled away.  By five o’clock, it was all over — the trash, that is.  Boxes, paper plates, lettuce, squished berries, remnants of the day’s economic progress.  Gone was the fish stall, only the odor of fish and some melting ice remained.  Four egrets strutted in confused circles, as if to say, “I know there must be fish here, I can smell them, I know, surely I will find them.”  The poor things, driven by instinct, just couldn’t leave.  On the opposite corner, a bent woman 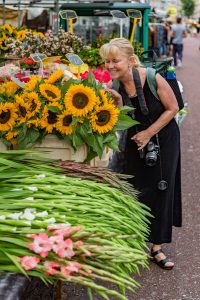 picked through the heap of discarded produce, gleaning more productively.  At the Moroccan restaurant, people sat at the outdoor tables three feet away from three feet of trash, oblivious to anything but the delicious aroma from their plates.  Turn the corner, and the smell follows, but undeterred, the people start gathering and sipping at the outdoor cafes.  We walk far enough away to escape the olfactory remembrances of the market day and join them.

We return as evening falls.  The trash is gone.  The entire street has been washed down.  Hand-sweeping has begun, using soft, wide, ancient brooms, and the street is reclaimed one foot at a time.  The barbershop in the half-subterranean level of our building has jazzy music playing and blacks are giving and getting neat haircuts.  We call hello to them, and up the narrow, steep steps we go.Looking out the window, I look down and watch the “Hair Extensions” family wind up their day on their chairs on the sidewalk.  The bedding merchant walks across and chats with the  guy who sells jockey shorts.  I look straight across the street at the third story window and mark the progress of the pretty tank-topped girl  as she sorts her clothes and chooses her high heels.  A dark-skinned man is reading a book as he dangles his feet out the window.  This is our new sense of community.  It is real.

The next morning, the whole routine repeats again, and again and again the next day until Sunday, when the street rests, the garage doors stay down, and the graffiti tells the tale.

3 thoughts on “Living Above the Albert Cuyp Marketplace — Amsterdam”