Not to deny whatsoever that Bergen was warned to us as being very ‘wet.’ Wet to the tune of approximately 300 days per year. Yes it was that type of wet which included a day or two of downpour approaching the heaviest recalled in our lives. Rain though is not a reason to steer away from this historical port town that began trading in the 11th century.

Bergen is also a decidedly fascinating destination: fish caught fresh and brought to market every morning, gorgeous views of old houses climbing up forested hills, and captivating history of the Hanseatic League. We visited all of these fascinations and captured lovely images along the way.

We arrived in Bergen via ferry, from Denmark. A few images in this set include that experience as well. The evening ferry from Denmark to Bergen arrives in Norway early morning. The traveler is able to view countless fjords during onboard breakfast.

The town is worth a visit! Enjoy this snippet representing some of our experiences.

Lavik is a very small village in Norway; a way-stop for us. The plan was for us to cross Sognefjorden via ferry, which terminated in Lavik.

Our stay was in a cabin that is typically used by hikers who journey up into the local mountains. With the help of our host, we did exactly that and thoroughly enjoyed the exercise as well as the views which you will see in the photos below.

These are samples the full set which you can also view at this link.

There are many fun and beautiful things to do in Norway. Our stay was short, but we had great visits to four wonderful towns/areas. Bergen was the first.

The full collection can be found at this link: Bergen.

Leaving Denmark to our first Norway destination, Bergen, involved a quiet ferry ride trough the night. First morning light allowed a wondrous display of beautiful Norwegian fjords which went as far as the eye could see. Beauty was not diminished from clouds and morning rain. Rather, the rain and mist added to endless passages which disappear into darkness and haze. 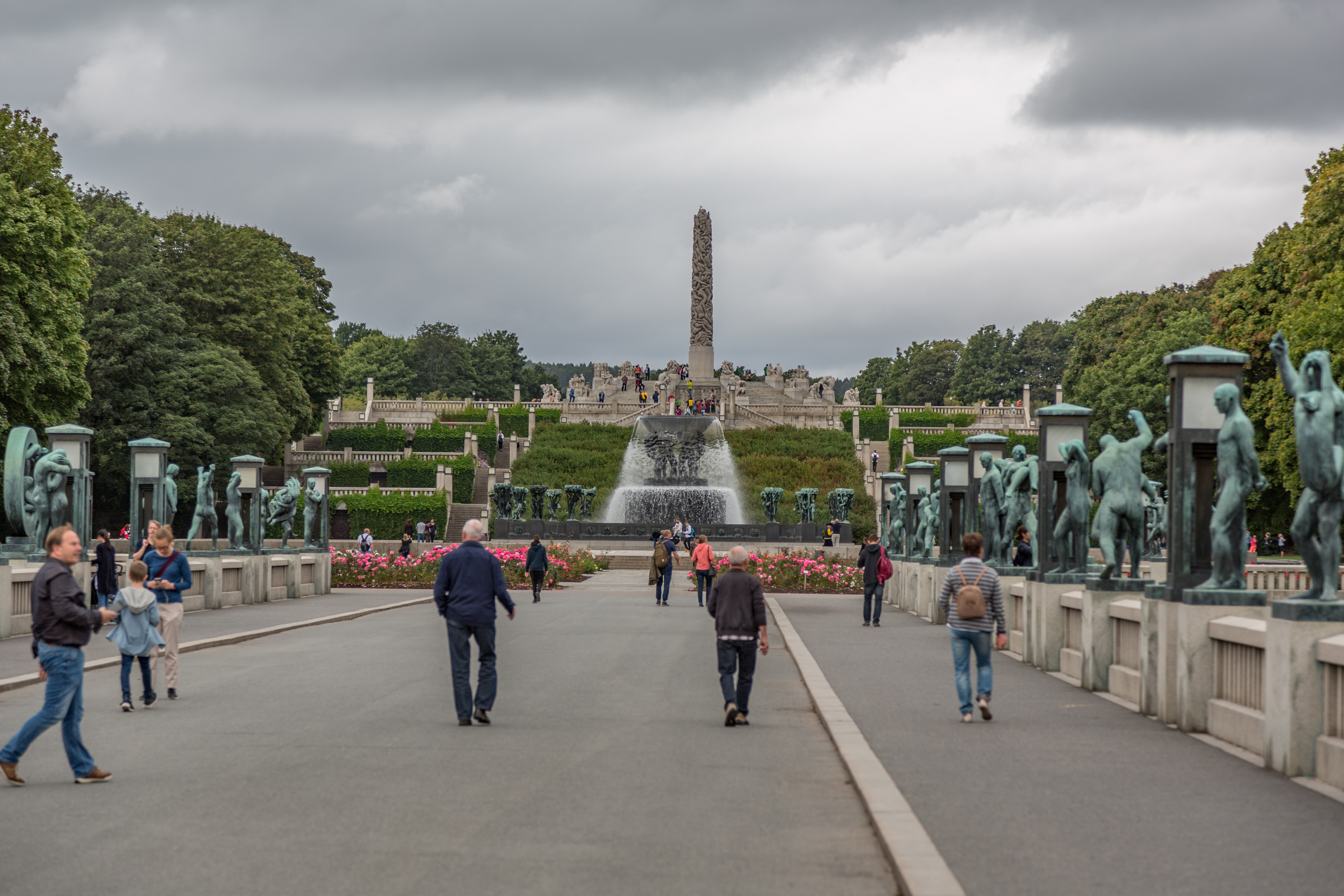 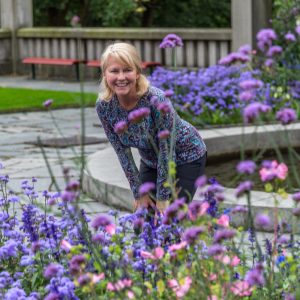 I would come back to Norway, just to see Vigelandsparken.  Vigeland’s sculptures are the most engaging and moving sculptures I’ve ever seen.  Imbedded in 80 acres of lush parkland, trees, lakes and streams, the sculptor Vigeland designed a series of bridges, formal gardens and geometric terraces for delighting the eye, refreshing the spirit, and displaying his works.

His pathway starts with a bridge, whose portal is flanked on both sides not by the guardian lions that you would find in Paris, but by strange serpents erotically entwining resisting and submitting nude females 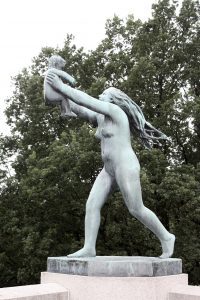 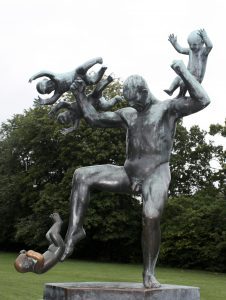 The bridge is populated with stone renderings of men and women in motion and in contemplation, solo and in communion.  Their poses emote tenderness, longing, striving, strength, waiting and burden-bearing. All is youth, adults in prime, children in anger and satisfaction, parents with offspring.  Those on one side of the bridge beckon to those on the other side.

A pause, then, for contemplation, as we stroll through a massive geometric rose garden. 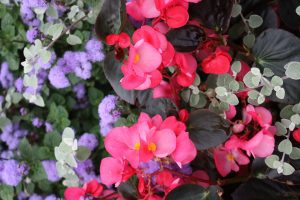 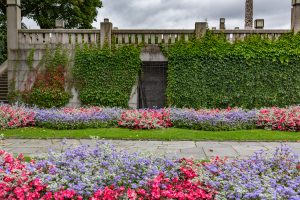 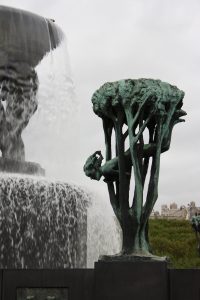 We enter now a plaza with a powerfully gushing fountain.  Surrounding, humans are clinging, reaching, trapped or nearly drowning within tree-like water plants.  On one side, the humans within are young and playful.  As you progress, the other side depicts struggle, distress, death, imprisonment.  Small frescoes, which at first are overlooked, each evoke a different human drama. 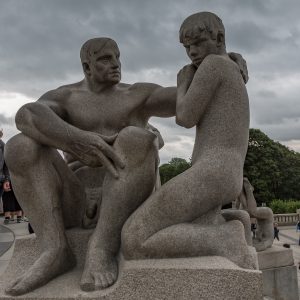 We walk on, up wide, gently escalating steps.  Four finely wrought gates invited from east, north, south and west. Leading up to an obelisk are sculptures of people at every life stage.  No one stood alone.  All were humans in relationship. Each grouping evoked an aspect of human living.  Progressing in a ring were depictions of every life stage, from playful childhood to wistful contemplation in old age. 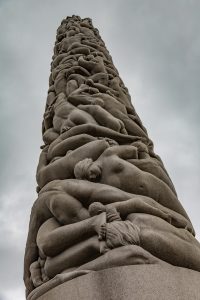 A towering column graced the highest point in the park.  Entirely formed of human figures, limbs interlaced, reaching, draping, one upon the other, building a tower of human life.  Powerfully, the artist suggests that civilization rises higher and higher, built upon the lives and achievements of those that came before.  Over time, the single individual merges with the mass.  No one is crushed.  No one alone bears the weight of all.

After a few hours in this park, I felt I had experienced a lifetime, actually many lives.  There is no wonder that the city of Oslo built a house and studio for this genius of design and sculpture.  I would recommend a flight to Oslo just to experience Vigelands Parken.  There is nothing like it in the world. 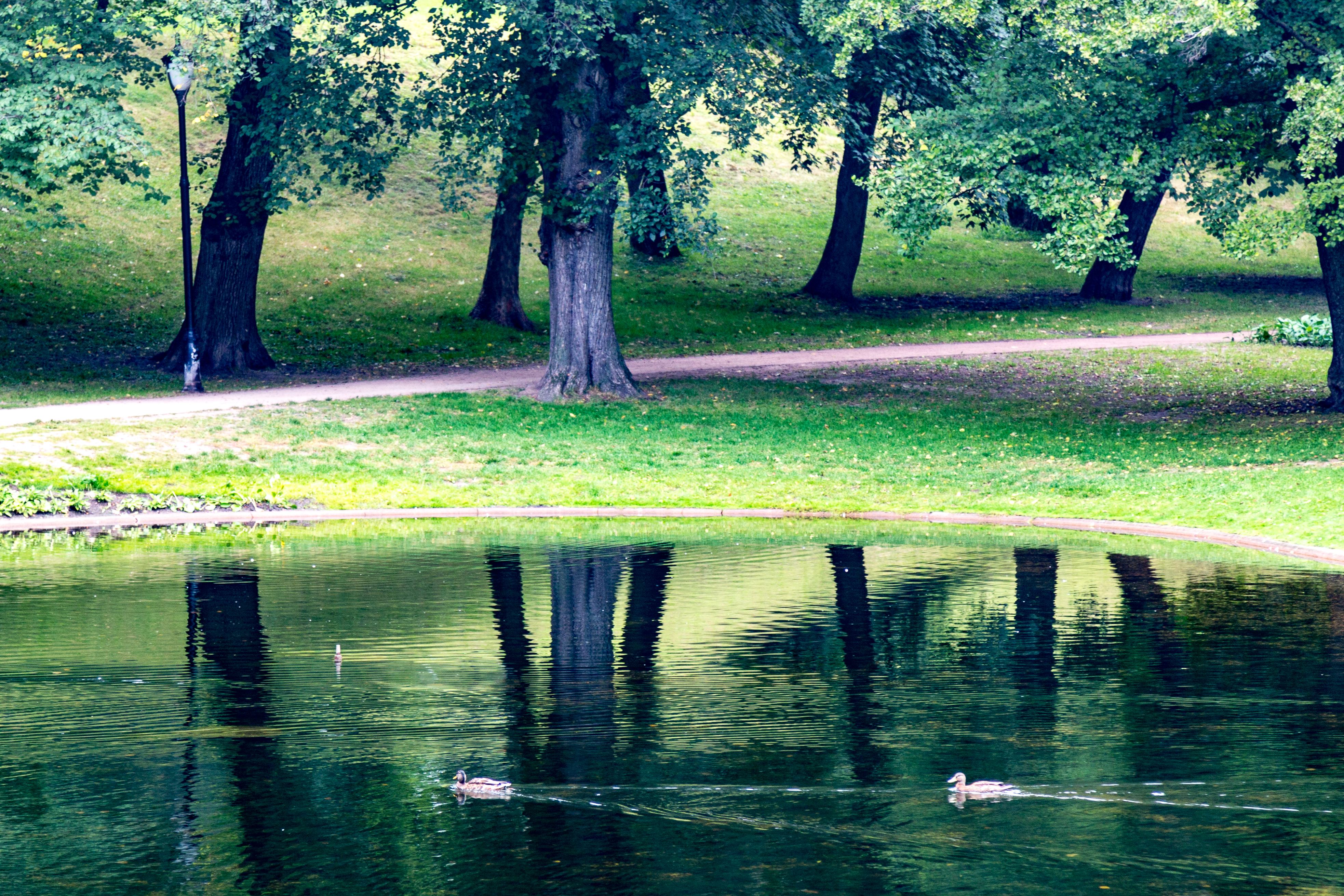 The best things about today are COMFORTS. All of these comforts, we take for granted at home. We’ve had major marvelous experiences, overlooking small inconveniences. Many times, that means just living like a typical European. Refrigerators are small, dishwashers uncommon, we’ve never seen a garbage disposal and showers splash all over the bathroom. Sometimes, we have adapted to what is there. We have slept in the bottom of a bunk bed, and on futons on the floor. We have had a bedroom the size of a walk-in closet. We’ve cooked in a kitchen so small only one person can fit in it. We’ve lived under ceilings so low, Martin had to duck every time he entered a room. We’ve shared a house with a Norwegian mother, her friend, a toddler and two Germans. And, we haven’t watched television for 40 days. 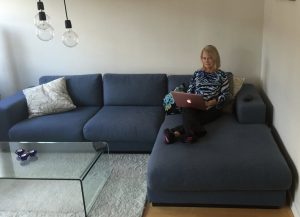 And now, we are in Oslo, in the best apartment we’ve had all trip. We have it all to ourselves. There is a deep, long sofa in front of a huge flat screen TV. Not only does the shower contain the water, but the bathroom is heated from under the floor. Right now, the clothes are tumbling gaily in the washer and the dryer is doing what it otherwise takes days to accomplish. 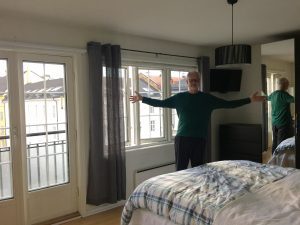 Did I forget the king size bed? (Rare!) Miraculously, there is a continental comforter that stretches all across the bed (two twin comforters is the norm in Scandinavia, on a double bed). We have closets! This is only the second time we have had closets. The apartment is light and bright, on the top floor. And we could go up on an ELEVATOR with the luggage! Our refrigerator was full of breakfast food upon arrival, and today we walked a short way to the food store, and filled it up the rest of the way. Life is so good! 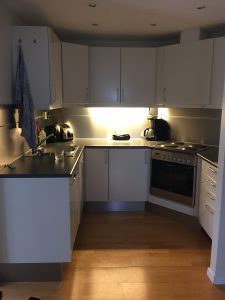 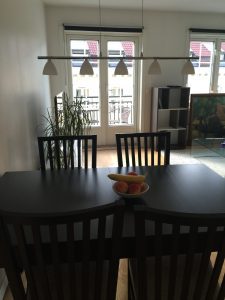 P.S. If you read yesterday about our sudden attempt to escape from the rain, you may be wondering what weather greeted us here. Yes, my dear ones, it did rain. But there was no wind, and it was brief. The sky actually turned gray-blue for awhile. You can’t really flee the rain in Scandinavia. The National Art Museum, a walk in the Queen’s Park, and a good lunch out took care of us just fine.