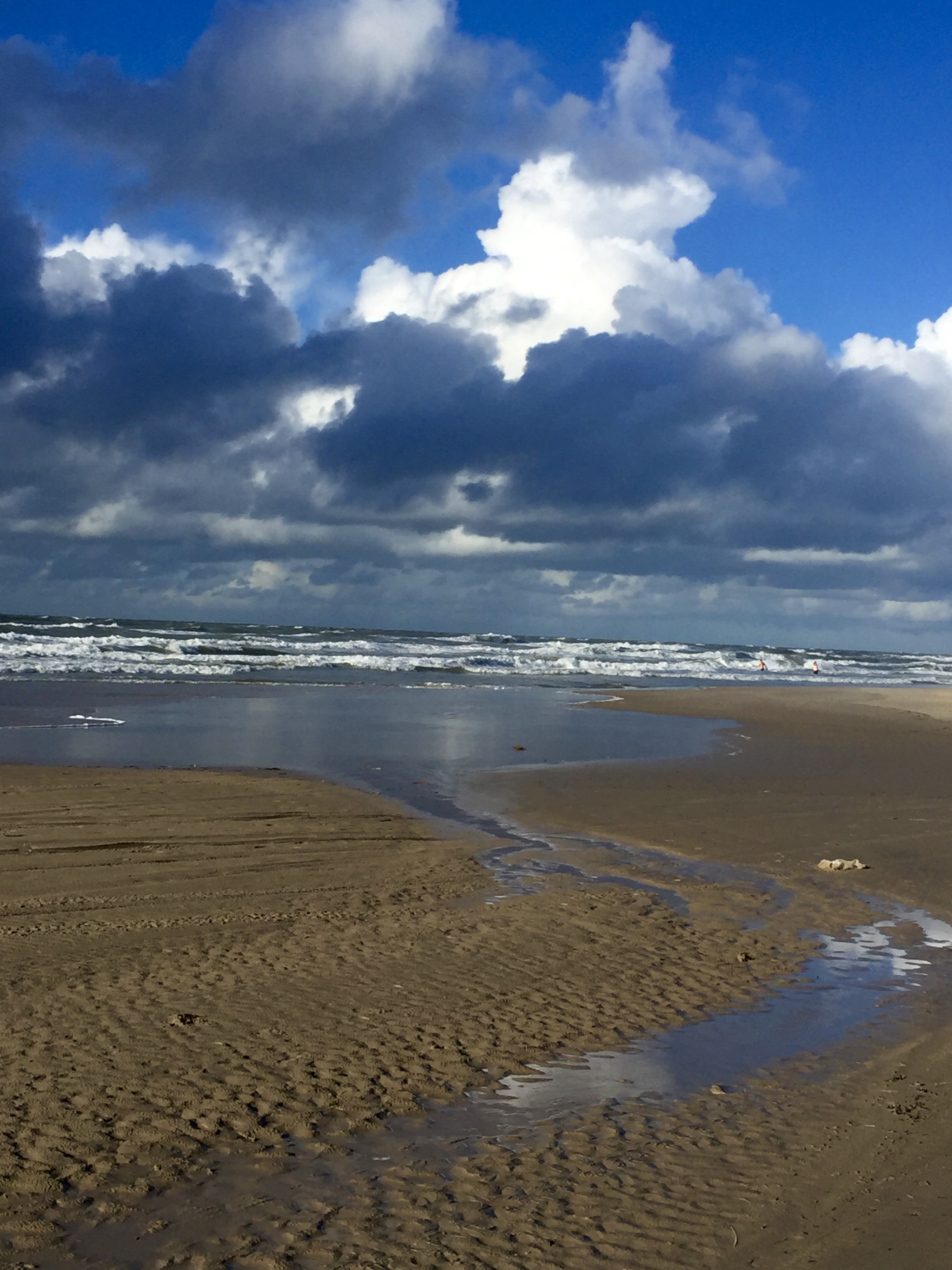 What change is wrought by the seasons!  We Californians don’t experience this.  Never before have I ever noticed change of season while traveling.  Of course, I’ve never traveled for two month, either.   This naive Californian is amazed.

First of all, the temperature has plummeted by about 20 degrees, to a bracing high of 48 degrees. The grass was frosted in the morning.  Yipes!  It’s suddenly winter to us, though Danes comment on how nice the weather is this week, since there is no rain and lots of sunshine.

During the summer months, the resort town of Blockhus is lively with vacationers.    The sand is dotted with tiny, white beach huts.  Cafes, ice cream stores and shops are bustling. 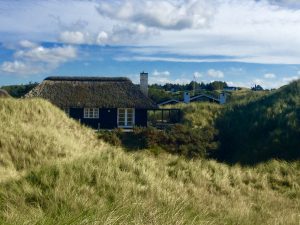 On October 1st, life in Blokhus suddenly changed.  All the little huts were rolled off the beach and tucked away for winter.  Only a few shops and restaurants are open now; most are locked up tight.  Most of the summer homes are now shuttered in preparation for winter storms.  Only a few lights twinkle among the grassy dunes at night. 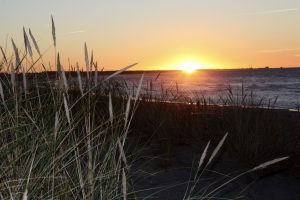 People who flocked here for the summer have migrated back to their winter homes.  The summer house is a way of life here in Denmark.    The season even triggers a change in residence.   Storekeepers suddenly have no store to keep.  Even the baker stops making my beloved spelt bread when the summer season ends.  People’s lives change with the seasons.

The whole landscape even changes with the seasons.  Winter storms wreck drastic change upon the land.  Here in northern Jutland, the shore piles high with dunes.  Martin, Lizzy, Flemming and I climbed to the top of one of these.  It was like being in a mountainous desert wilderness of windblown sand.  The giant dune moves five to ten meters eastward every year, pushed by the fierce and persistent force of winter winds.  It has completely buried an entire farm.  Within years, it will devour the forest in its path.  In a decade, it will reach the sea on other side of the country, and form a huge white cliff of sand. 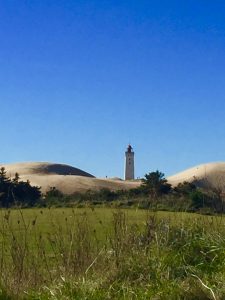 Yesterday, we visited a lighthouse which will fall into the sea within a few years.  The dramatically high dune is being washed away by waves and wind.  Already, the light keeper’s house and surrounding buildings have been buried in sand.  The walls have been pushed down by the force of the moving sand.  The dune will engulf the lighthouse:  In five to seven years, the dune will be invisible.  Storms come in the winter, and by spring the terrain is altered.  What you could once walk on, is no longer there.  What you could see before, becomes invisible. Change.  Unstoppable.  Relentless.

Ebeltoft is an old port town on the Kettegat Sea, northern Jutland peninsula of Denmark. As one can see on this map, the green portions, a large fraction of the general area is dedicated to national parks.

Much of our visit was dedicated to hiking along coastlines. But there were also some quite interesting museums – notably the Ebeltoft Glass Museum and Fregatten Jylland – one of the world’s largest wooden warship, in excellent condition. Both museums were quite interesting to visit. We particularly enjoyed the glass museum.

The Ebeltoft section of our journey includes a trip to Jelling. The area and museum and church are remarkable as to quality and historical significance. More information can be gleaned from the Unesco World Heritage List posting.

Jelling is one of my favorite Denmark experiences, likely due to my Danish heritage. I have visited twice now, and will visit again in the future.

The photos below contain some of our Ebeltoft and Jelling images. All of the culled photos for this part of our trip can be found in this link.

Ribe is an old town being rich with history. It is the oldest town in Denmark. Our AirBnB hosts provided lots of help to pick out memorable sites and experiences. Slightly outside of town is a reconstruction of a Viking village which originally was discovered inside the oldest part of Ribe. The Viking town is recreated using the best information available. Once again, the Danes have created a rich experience in this recreation for adults and children.

Here are photos of the entire stay which includes the Viking village and other things that we explored.

And the Viking town reconstruction:

We stayed on this island to visit the small old town of Ærøskøbing. Read more about the lovely old town at this site.

The adventure included a beautiful ferry ride to the island, included in these photos.

Nyborg was Denmark’s capital From 1183 to 1413. The castle of that time can still be visited. Margarite I initiated building of the Nyborg Church (built between 1388–1428), and my uncle Jens Kristiansen was pastor for many years